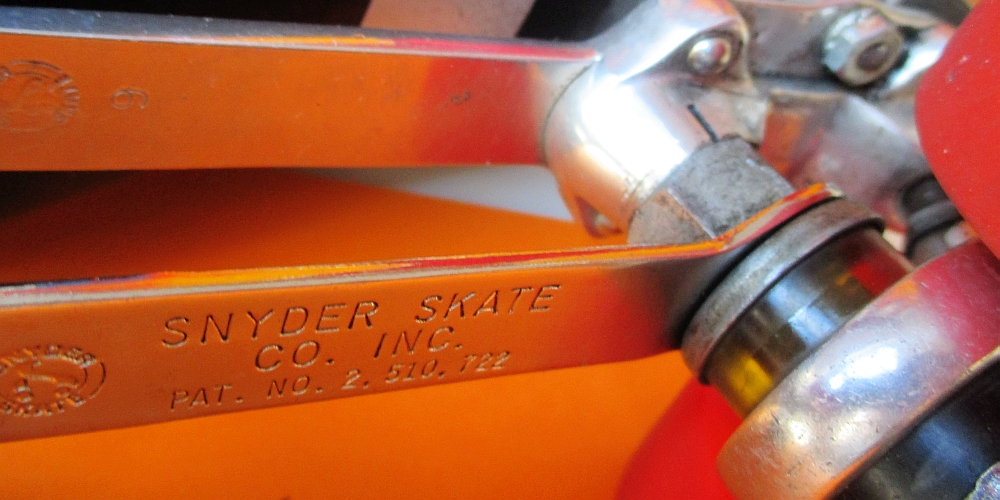 We can celebrate the 70th anniversary of modern roller skates.

Roller skate plates consist of trucks with double-action, a cushion above and below the truck, and adjustable pivots for tension-free turn of the trucks. This is considered as main features of modern roller skates. All of this was patented 70 years ago, on May 31, 1946, when Charles W. Snyder filed his patent for new innovative roller skates plates.

Most noticeable in Charles Snyder’s US Patent 2510722 is the cushion above and below the truck, which provides a better and more controllable steering and is the skate design still most used in today’s quad skates.

This invention relates to a roller skate and the main object thereof is to provide an improved flexible connection between the foot plate and the trucks of the skate.

Actually he invented the skates for his daughter Shirley, multiple artistic skating champion in the 1940s and 1950s. When she did so well on them, he left his job as a tool-maker to make the skates full-time. The model was named “Super Deluxe” and a tremendous success.

Charles Snyder’s skates based on riveted hangers at the foot plate, and a cross-bar to counter torsion, back then the standard layout.

Nowadays skate plates are made from one-piece aluminum milled in CNC milling machines. This reduces the weight, 400 g for typical modern skate plate inclusive trucks, compared to 700 g of the original Super Deluxe. Nevertheless the manufacturer Sure-Grip offers still the Super Deluxe and the other Snyder skate plates. So the Super Deluxe can be regarded also as the longest built skate plate.

I got my first Snyder Super Deluxe plates in 1983. I lived in Berlin, Germany. Back then without the internet and simple global shipping they were not easy to obtain and also quite costly. I was very proud about these precious things. The plates came with a guarantee card, which I returned to Snyder Skates. Much to my surprise I received an envelope with a letter, including a patch, some weeks later. That kind of customer care really impressed me.

Charles Snyder not only invented the Double Action, also he held patents in addition for both the toe stop mount as a part of the skate plate (which was before separately attached at the boot or the plate), and the Click-Action for easy adjustment of the compression of the cushions.

Double-Action cushions, toe stop mount, and click-action adjustment are most common characteristics of roller skates plates to date. So Charles W. Snyder has to be recognized as an outstanding inventor in the history of roller skates on a par with John Joseph Merlin, who created the first known roller skates, which consisted of a small row of metal inline wheels in 1760, and James L. Plimpton, who patented the quad skates, which allowed people to steer just by leaning to the left or the right in 1863.