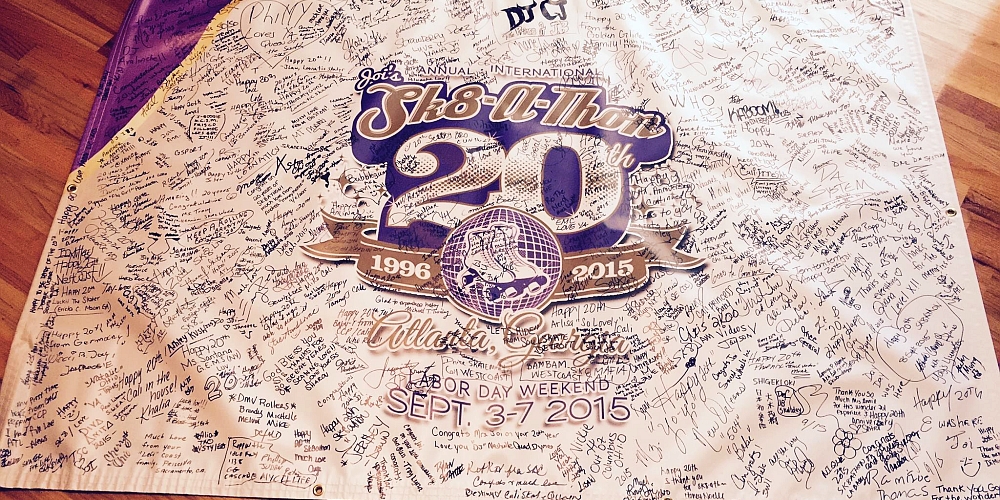 One topic that must be showing up on a skater’s list “Things to Do Before You Die” is definitely Joi’s Sk8-A-Thon, at least once in a lifetime to join the largest skate party worldwide, taking place annually at Labor Day weekend in Atlanta, GA.

1996, in the dark days, when rollerblading almost conquered roller skating, and the internet not yet connected skaters from all over the world, John Perkins and Joi Loftin started the Sk8-A-Thon skate party to bring together the remaining adult roller skaters from the South and other parts of the United States. This skate party evolved quickly to the largest gathering of Style Skaters in the US, and attracted international skaters as well.

So every Labor Day weekend, this year September 1-5, 2016, skaters from the US and other countries are getting together to celebrate their passion in Atlanta. The skaters can look forward to two parallel skate session each night in different roller rinks in the Atlanta Metro Area, with music mixed by United States’ best Skate DJs, and the experience of the most awesome skaters up close.

Besides the skating sessions there are all the things, which complete a good party. Dancing in the ballroom, meeting skaters from all over the world, vendors presenting equipment, apparel and accessories, … and last but not least the legendary southern hospitality.

That’s roller skating. But not to forget the Capital of the South. Atlanta, outside of the US mostly known for the 1996 Summer Olympics, the headquarter of Coca Cola, and the world’s largest airport, is the major center of African American culture with a wide selection of museums, music scene and a restaurants.

Joi’s Sk8-A-Thon is worth the trip. Caution: Could be addictive, you may lose track of the other skate things to do before you die.